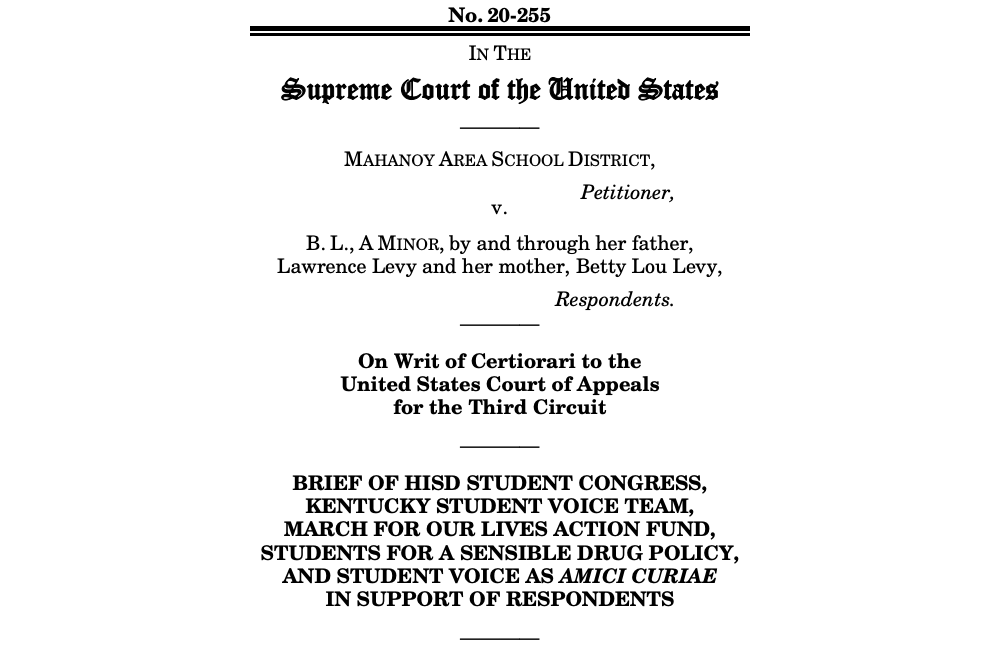 Mahanoy is likely to be the most important student free speech case in more than fifty years. Since Tinker v. Des Moines (1969), students have enjoyed off-campus First Amendment protections to hold rallies, testify at school boards, and lobby on legislation without being punished by their schools. The Supreme Court could deliver a debilitating blow to student activism if it decides to roll back these rights and authorize schools to regulate any “disruptive” off-campus or social media speech. In this dystopian world, schools could constrain student activism and render impossible what the late Congressman John Lewis called “good trouble.”

Student free speech rights are as important as ever. In February, district officials in the Houston Independent School District (HISD) attempted to shut down independent student advocacy by dissolving the district’s relationship with HISD StuCon. By mobilizing students on social media, in the press, and at school board meetings, StuCon defeated the motion and continues to advocate for independent student voice in Texas. “Even as a high school freshman, my voice is important. I’m not afraid to speak up and use my rights of freedom of speech to stand up for all students”, says Michel Leon, a student at Bellaire High School in Houston, Texas.

The role of student speech in education is essential and has been consistently placed at risk. In March, some legislators in Kentucky attempted to remove the student and teacher representatives from the Kentucky Board of Education. The Kentucky Student Voice Team worked quickly to create a social media campaign to lobby against the change, reaching hundreds of citizens. With this support, the student and teacher seats were retained and protected by law.  "The main purpose of school is to teach students,” says Chandler Maddox, a junior at Marshall County High School in western Kentucky. “By giving students a chance to speak about their schools without retribution or reprisal it can improve all aspects of the learning process and experience, helping them become more engaged and thoughtful citizens over time.”

Especially given the rising importance of student activism on pushing the nation towards progressive change on education, climate change, gun violence prevention and more, Maya Green, Organizing Director at Student Voice and first-year student at Stanford University, is concerned about the potential impact of Mahanoy on national-level youth movements. “Historically, you can find students on the frontlines in every moment of major organizing and activism in this country, and our generation has harnessed the transformative power of social media to continue this trend,” Green said. “The organizing and storytelling work Student Voice does to advance justice in our schools is made entirely possible by the Internet. Online expression has been a vital tool in recent pushes for policy and systems change, as well as calls to shift decision-making power towards young people. As the first civic institutions that many folks are exposed to, schools should encourage this tremendous show of civic engagement and not undermine it, and by recognizing students’ unequivocal right to free speech off-campus and online, the Supreme Court can make sure young people’s democratic expression goes unhampered.”

About March For Our Lives:
Since March 2018, students from all across the United States have called for common-sense reforms that will save the lives of more than 3,000 young people each year, including: implementing universal, comprehensive background checks; creating a searchable database for gun owners; investing in violence intervention programs, specifically in disenfranchised communities; funding the Centers for Disease Control to research gun violence so that reform policies are backed up by data; and banning high-capacity magazines and semi-automatic assault rifles. For more information visit www.marchforourlives.com.