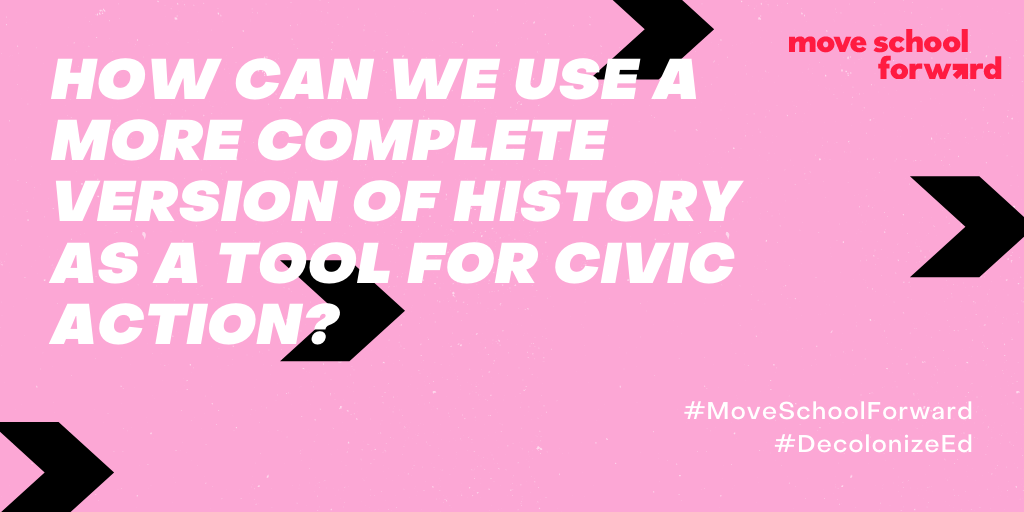 In solidarity with students across the country fighting for anti-racist curricula in their schools, the Education Justice Collective’s Move School Forward team, which includes Student Voice, hosted a Town Hall on Decolonizing K-12 Curriculum featuring history experts and student organizers from across the country. History experts explained the necessity of accessible, accurate history and civics education to democratic society and students told the stories about their experiences in school related to anti-racism, decolonizing curriculum and civic action.
‍

The conversation was moderated by Avery Smedley, a student organizer with the Youth Activism Project and Montgomery County Students toward Equitable Public Schools and a senior at Albert Einstein High School in Kensington, Maryland. Smedley said, “this is the beginning, but we all have to move forward and follow up with action”, calling on students to use the Move School Forward action guide to write letters to their schools and districts calling for anti-racist curricula.
‍

On how her experiences have influenced her advocacy for anti-racist curricula, Alexis Campbell, the Youth Engagement Coordinator at Student Voice, a youth-led national nonprofit advancing educational equity, and a rising first-year at Spelman College in Atlanta, Georgia said, “In the 9th grade, when my fellow students and I learned about genocide in history, there was a lack of empathy and caring that the teachers had towards what we were learning. They were talking as if these people throughout history weren’t human, which made me realize that there is a disconnect between how we’re viewing race in class and history. We are just taught to accept injustices from an early age, rather than being taught how to critically think about where we are in history.”
‍

“I wish [the representativeness of history curriculums] would have gotten better since I was in school. I think a lot of it is that we didn’t see ourselves reflected in the history books, in the educational films, in the media. If you just saw what was presented in school, you’d think that all of the United States was white.” said Dr. Karen L. Ishizuka, the Chief Curator of the Japanese American National Museum, regarding her experiences with inaccurate history curricula. “With the incarceration of Japanese-Americans during World War II, when many of my friends said their parents went to a camp, their teachers just basically said that’s a lie. That sets up so much you’re called a liar by your teacher, the authority figure. You think, well am I? Are my parents? It snowballs and lasts for a while with yourself. It really proves the need for decolonization [of history curricula].”
‍

On why anti-racist education is necessary for all students, Harmony Esqueda, a student organizer with Our Turn Los Angeles and a first-gen college student and senior at the University of Southern California said, "Learning about different histories isn't supposed to just be for people of color. It is for everybody to learn and understand so that we can have empathy for each other, so that we can learn how to best support one another. If I know your struggles and your history, I can show up and be there for you that much more. That goes for everybody, especially white people."
‍

On why representation in history curriculums is so critical to students’ future success, Amina Salahou, a student organizer who founded CuseYouthBLM, an youth-led group working towards the removal of school resource officers in schools, and a senior at Nottingham High School in Syracuse, New York said, “Not seeing people who look like myself in history in a positive way definitely has been detrimental. It frustrates me because the concept of teaching is that you want students and young adults to become productive members of society, and when students aren’t able to see themselves or a future for themselves through school, then what do you expect them to do once they’re older? They don’t see people who look like them as leaders. They don’t see them as scientists or powerful people.”
‍

Regarding how STEM (science, technology, engineering and mathematics) educators can incorporate anti-racist principles into their curricula, Esqueda also said, “My environmental studies curriculum is very clinical … A lot of the environmental racism aspects or the food justice, food apartheid — things that are intrinsically related to race and socioeconomic status— a lot of this gets brushed under a clinical STEM point of view … I see decolonizing curriculum in science to be talking about accessibility and talking about the disenfranchisement of people of color.”

As we are inundated with calls for “reopening schools” and returning to normal, it is crucial that we demand a just future for our education system that includes students as full participants in the decision-making process, from the school to state levels. Where people are reimagining the future of schools, the voices of the most marginalized students are consistently sidelined. The Education Justice Collective, including Student Voice, Our Turn, The Prichard Committee Student Voice Team, UrbEd Advocates, Youth Activism Project, Students for Equitable Public Schools, GenUp, Students for Education Equity, Teens Take Charge, Young Organizers United, HISD Student Congress, Oregon Student Voice and IowaSLI has outlined key principles to move school forward.