The First Ever Presidential Youth Forum: Our Takeaways

For the first time in election history, students were given the opportunity to ask Presidential candidates questions in an authentic format. Here’s what we learned. 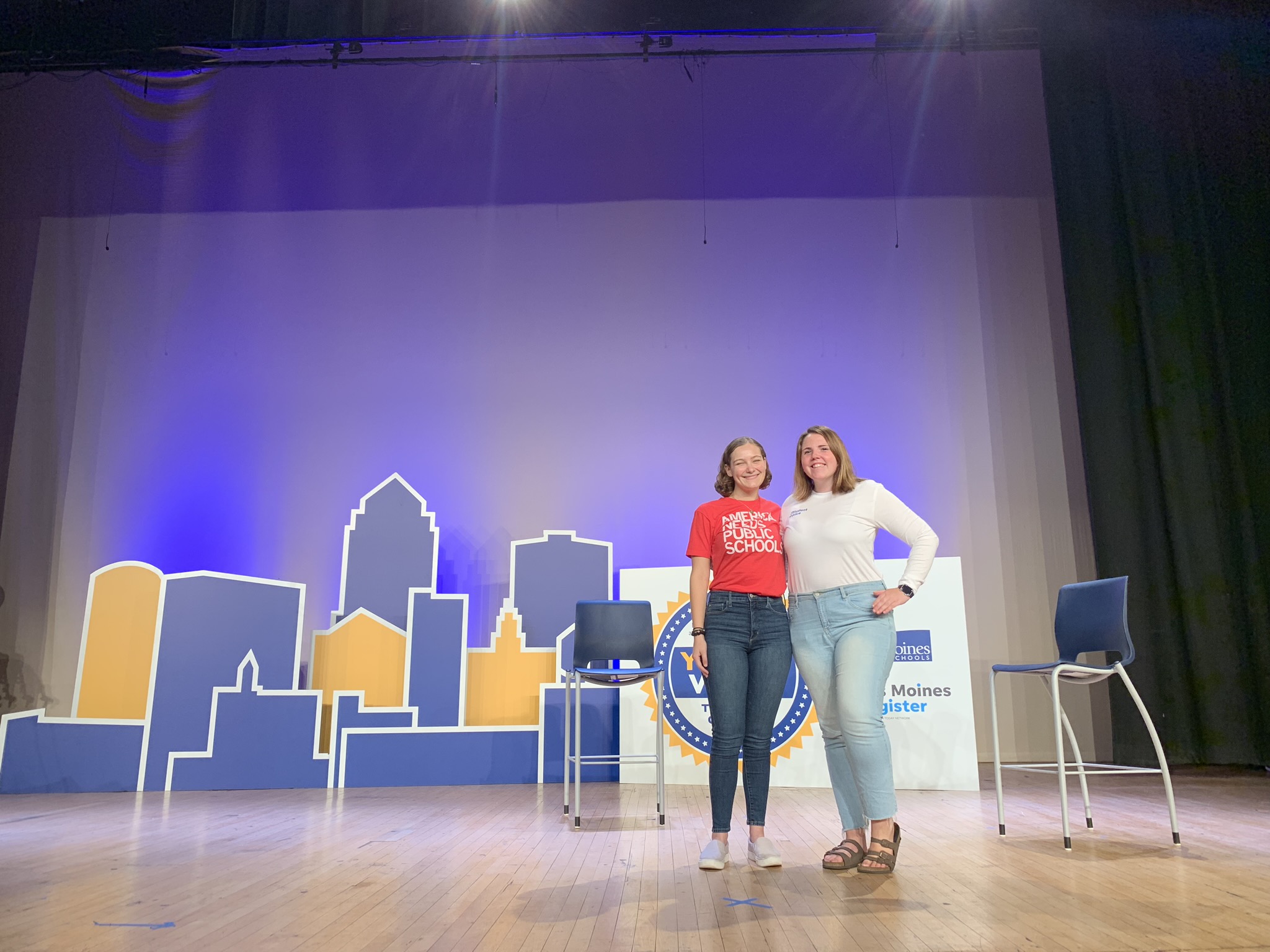 On the morning of Sunday, September 22nd, several hundred young people gathered in Roosevelt High School in Des Moines, Iowa to hear from some of the democratic candidates for President. Since the Iowa caucus became the first in the nation to vote on presidential candidates in 1972, candidates have spoken in school auditoriums and gymnasiums, fried steaks and attended state fairs, and braved the summer heat and winter cold to court potential voters. In some ways, Sunday morning felt like any Sunday during caucus season as voters trickled into the auditorium of Roosevelt High School to hear from six candidates.

But Sunday was a special event: it was the Iowa Youth Voice Forum. Hosted in partnership between The Des Moines Register and the Des Moines Public Schools, the forum was a unique opportunity for young people to engage with the candidates directly on the issues that impact them most.

Student Voice was able to attend the forum and traveled from New York City and Washington D.C. to do so. However, we weren’t alone in traveling hundreds of miles to take part in the event. Young people traveled from across Iowa, the midwest, and all throughout the country to participate in this first-of-its-kind event.

After introductions from representatives of Des Moines Public Schools and the Des Moines Register, the young people facilitated the event. Each question was written and asked by a student. The forum was moderated by Fez Zafar, a senior at Roosevelt High School.

Six candidates attended the event: Representative Tulsi Gabbard, Senator Michael Bennett, Senator Bernie Sanders, Andrew Yang, Tom Steyer, and Representative Joe Sestak. Each candidate was asked the same question first: “What would you do to encourage young people to turn out to vote?” This question set the tone for each candidate: if they wanted young people to vote, and to vote for them, they had to work to show the young people that they deserved it. Young people would not simply turn out for them because of their party label or reputation, but because the candidate spent time crafting policy to address the issues that young people are acutely aware of and concerned about.

Representative Gabbard stressed bipartisanship as a means to pass gun control legislation and shared her history of starting an environmental advocacy nonprofit as a teenager to show her dedication to climate change and climate justice. When asked about her commitment to listening to young people, she spoke of her experience of being elected to office at age 21, despite people dismissing her at the time for being too young.

Senator Bennett focused on his experience as the Superintendent of Denver Public Schools. After getting pushback from the moderator when stating that education is a solution for job loss, Bennet asserted he thinks that “education shouldn’t be [a] long term [solution]. One of the great injustices in this country is that our education system is reinforcing income inequality, rather than liberating people from it. The zip code you are born into should not determine the education you get.”

Student Voice’s Megan Simmons asked Senator Sanders, “What will your administration do to give young people a seat at the table, even if they aren’t old enough to vote?” Senator Sanders emphasized his work as the Mayor of Burlington, where he met with young people and their parents regularly to hear their concerns, which led to the creation of a Teen’s Center run by young people. He finished by stating that he believes that “if we are going to be a vibrant democracy, you have to listen to the young people. We’ve gotta listen to know what’s on your mind. You’re citizens of America. Even if you can’t vote, you’re impacted by public policy.”

Andrew Yang was greeted with the most enthusiasm by the audience for his ability to communicate his ideas clearly, sounding, as audience members remarked, “like a normal person.” Student Voice’s Taylor Kahn-Perry asked him if his administration would commit to funding deeper learning initiatives, like social and emotional learning and arts education. Yang was so supportive of deeper learning that he ran to the front of the stage to give Taylor a high five. “I’m so on board. We need to get much much deeper about the way we educate and learn;We need to make school more relevant for our young people.” Yang continued to elaborate how school design and climate impact a young person’s life, ending by saying that we need to humanize our educational institutions.

While many of the questions asked were explicitly about school and student voice, students also asked about the cost of prescription drugs, gun violence, climate change, marijuana legalization, vaping, LGBTQ+ rights, sexual assault and traficking, and college affordability. These issues dominate the news and policy conversations, yet young people are often told that they are too young to participate in the discourse and debate. Students shared stories of their experiences with each of these issues, proving that there is no such thing as being too young to understand current events.

While the forum was an empowering experience for the students in attendance, it is frustrating that less than one third of the democratic candidates attended, despite 17 of the candidates being in Iowa the day prior for the Iowa Steak Fry.